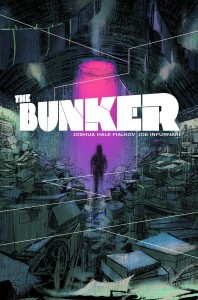 In The Bunker, five friends decide to bury a time capsule in the woods, only to find the titular bunker when they start digging. Once inside the bunker, they discover letters from their future selves, who somehow sent a bunker full of evidence back in time to warn their younger selves about the impending apocalypse they will have a part in causing. It turns out this innocuous-looking group of young people includes a future president, a soon-to-be brilliant scientist and several other eventual movers-and-shakers. Heavy stuff for a bunch of recent college grads, no?

When I started reading The Bunker, it occurred to me to wonder whether I’d ever read a graphic novel with art I hated despite enjoying the story. I’m honestly not sure I ever have. Probably the only situation where I continued enjoying a book in spite of the art is when the artist changed for an issue of a comic I was already invested in reading. In any case, I really did not like the art in The Bunker, and the story didn’t do anything to win me over.

My biggest problem with this book is a serious lack of characterization thanks to an indistinct art style and some fairly underdeveloped writing. The art is so stylized that it becomes very hard to tell the difference between the extremely generic characters. The main visual distinction is that some of the characters wear glasses and some don’t, and one guy is bigger than the others. We get a bit of back-story here and there, but the author spends the most time on one of the girls, who remembers being raped by her uncle when she was young – i.e. the most cliché, heavy-handed way to make a story about a woman feel Serious and Real.

As for the dialogue, it’s oftentimes the case that every other word the characters say is “fuck”, and everyone speaks with essentially the same voice. One character does make a few unfunny and off-color jokes in the first issue… but then things get all serious and he stops behaving that way. After the bunker and its predictions come into play, this turns into a fairly serious-minded tale of doom-and-gloom.

Ultimately, The Bunker just felt like a weird kind of wish-fulfillment. Instead of discovering a more personal and believable secret from their future selves, the characters find out that each of them is an incredibly important world-destroyer and of course that they were able to figure out how to send a huge bunker back in time. I think it’s possible to tell an interesting story about receiving notes from your future self, but this doesn’t feel like the way to do it, especially because the details strain credibility in so many ways.

The worst part? This first volume is almost all setup and very little plot. Not much of substance happens after the characters find the bunker – they freak out and fight with each other and then eventually get around to dealing with one of their predicted catastrophes. Definitely a disappointment.