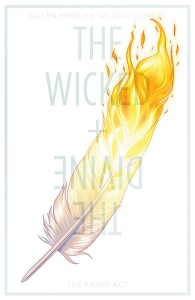 The Wicked + The Divine, Volume 1: The Faust Act

The Wicked + The Divine takes celebrity worship to an extreme and imagines a world where the gods reincarnate in human form once every ninety years, oftentimes as the biggest stars of their generation. They are always young, beautiful, famous (or infamous) and dead within two years. Our window into the lives of the “pantheon” is Laura, a seventeen-year-old Londoner with a fan-girl crush on nearly every member.

When Laura faints at a concert performance given by a god named Amaterasu, Lucifer – incarnated here as a blonde girl with an androgynous Bowie look – takes her backstage and irrevocably tangles her life with the affairs of the gods. Laura’s time backstage ends quickly thanks to an assassination attempt on the gods, which Lucifer foils by snapping her fingers and exploding some heads. This results in Lucifer’s arrest and trial, and Laura decides that she has to do everything she can to help her idol, no matter the danger.

Before I get into the writing, I think I should state for the record that I absolutely love Jamie McKelvie’s art, which the best part of this book by far. The lines are bold and strong, and his style is so distinctive that I can identify it immediately when I come across his work. Combine McKelvie’s lines with Matt Wilson’s vibrant coloring and you’ve got a book that is absolutely gorgeous to behold. That said, The Wicked + The Divine isn’t just a pretty face; it’s also exceedingly British and peppered with Kieron Gillen’s wicked sense of humor throughout. The problem is that the story is a bit muddled and the plotting occasionally feels rushed.

Laura’s introduction to the world of the gods feels a bit arbitrary; Lucifer picks her out of a pile of fainted teenagers and then she’s neck-deep in weirdness and danger. I never quite bought into the idea that a seventeen year-old super-fan could do anything significant to help a group of supposedly all-powerful gods or that any one of them would ever rely on her for help. Lucifer reads more as a teenager play-acting the part of a butch bad girl and not the Lord of Darkness, but it still rings a bit false when Laura keeps insisting that The Devil Herself desperately needs her help.

Despite these hiccups, I did enjoy reading the first volume of The Wicked + The Divine, and I do think I’ll check out more volumes in the future. I just hope that the story gets a little tighter as the series continues and that Laura has a more active, crucial part in events as they unfold.