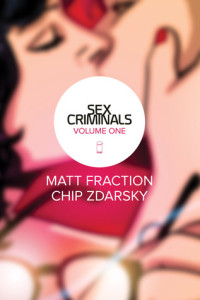 Sex Criminals is a bit of a phenomenon. It’s one of those books that I heard a lot about before I ever got around to reading it – the reprint covers in particular were everywhere on Tumblr, so I saw every variation a good million times. Luckily, the hype is actually justified in this case, probably because the story is far deeper and more nuanced than the raunchy joke it seems to be.

Volume One of Sex Criminals tells the story of Suzie and Jon, who meet at a party and hook up, only to discover that both share the completely bizarre ability to freeze time when they orgasm. Naturally, they decide to use this ability to rob a bank. What that summary doesn’t tell you is that Suzie and Jon are both carefully drawn, believably human and full of heartbreaking flaws.

One of the first things Suzie reveals as she narrates her story is that her father is dead, murdered by a gunman. As far as her childhood goes, things don’t get better from there. Her mother quickly sinks into alcoholism and Suzie uses her ability to freeze time as an escape from the world.

As for Jon, he seems less troubled at first until it becomes clear that he uses his abilities to act out in anger against the world, oftentimes in petty or childish ways. Heavy stuff, all of it, and yet the book is still incredibly funny. In fact, I’d argue that one of the main reasons the comedy works so well is that leavening of darkness, which makes the characters seem that much more real.

Zdarsky and Fraction might have been content with telling a fractured romance story with a few sci-fi overtones, but they clearly felt like that wasn’t nearly enough. Instead, they include things like an extended sequence where the lyrics to Queen’s “Fat-Bottomed Girls” are hidden behind apologetic notes because they couldn’t actually get the rights. Additionally, the sci-fi elements ramp up over the course of this first arc and we are given hints that there is a larger world of sexual absurdity surrounding Jon and Suzie’s more personal connection.

The art is great throughout – unique without being overly stylized or distracting – and the writing is hilarious and affecting in equal measure. I can’t wait to read more of Sex Criminals; I’m just sad that I’ll catch up to the current issue very quickly, and then who knows how long I’ll have to wait to read more. This is, of course, the downside of creator-owned comic books nowadays: they can and do publish whenever they feel like it, even if that means months between issues.