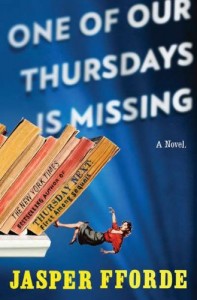 If you happen to be a book nerd who likes fantasy, mystery, satire and a healthy dose of metafiction, the Thursday Next series will be right up your alley. It quickly became one of my favorite series after I read the first five books in a mad rush over the last year. However, after finishing the sixth installment, One of Our Thursdays is Missing, I’m unsure how I feel about the future of the Thursday Next books.

On one hand, One of Our Thursdays is Missing is a reboot with a different viewpoint character, but on the other hand it’s also the most self-referential of the entire series so far, and probably the worst possible place to jump into the series as a whole. Also, because it’s a Jasper Fforde book, telling you that there is a new viewpoint character is a huge oversimplification.

If you’re unfamiliar with the series, it’s about Thursday Next, a police detective in an alternate universe who is able to leap into fiction and uses her powers to solve mysteries both in the “RealWorld” and the “BookWorld”. That’s only scratching the surface, however; Fforde overstuffs the books with an insane number of alternate-world details and odd little touches. It makes the books almost impossible to accurately summarize.

The short version is that Thursday’s adventures were novelized by ghost writers in her world. What this means is that there is a “real” Thursday and a “fictional” Thursday. The fictional Thursday is sort of a cross between an actor and a clone of the real Thursday. Fictional Thursday only has to perform when someone in the RealWorld is reading one of her books. However, readership numbers are dropping and she finds herself with too much free time on her hands. When she hears rumors that the real Thursday may have disappeared, fictional Thursday begins a surreptitious investigation, and almost immediately finds herself in over her head.

Much like her RealWorld counterpart, fictional Thursday is driven to solve this mystery at all costs. However, she isn’t exactly like the real version; in the book series, her husband, Landen, was killed off in the first book to “raise the stakes”, and she finds herself envious of the real Thursday’s family. She also doesn’t consider herself quite as talented a detective, especially since she flunked her entrance exam for the BookWorld police force.

The overall portrayal of fictional Thursday is my main problem with this book. When we were initially introduced to this fictional version of Thursday in the fifth book, she was portrayed as a hippie do-gooder who is too much of a pacifist for proper police work. However, in this book she mostly just behaves like a less confident version of the real Thursday. She tells us that she would probably solve problems by hugging everyone, but it felt like I never really saw the differences in her personality in action. Mostly she just seemed like a diminished version of the real thing. Fforde takes away a lot of the real Thursday’s defining characteristics and doesn’t give us anything truly compelling in their stead.

Also, a word of warning: Fforde really likes to throw in little metafictional jokes. Some of the stuff in this book relies on a fairly thorough knowledge of previous events in the series. It was definitely a huge help that I’d read all of the books in short succession. I’m not sure I would have caught all of the little details that Fforde throws in otherwise. However, even with all of that knowledge, I was occasionally a bit confused by events, and wondered if Fforde knew what he was doing. My best advice is just to try to relax and enjoy the ride.

Ultimately, I have to say that this is my least favorite of the Thursday Next books. A lot of what I love about Fforde’s books is present – his incisive touch for satire, madcap plotting, and crackpot world-building – but it just didn’t have the same heart as the previous installments. I never really warmed up to the fictional Thursday Next as a protagonist. In my opinion, she doesn’t rise above her status as a stand-in for the real deal.

As for the future of the series, I’m not quite sure where it will go from here. The first four books are a sort of loose quartet, and when I finished the fifth it seemed likely that he was setting up another trilogy or quartet. Instead, Fforde made a complete left turn and gave us this book, which doesn’t really follow up on the fifth book and mostly ends up being a bit of a standalone story and/or narrative cul-de-sac. My hope is that Fforde has further adventures planned for the real Thursday Next, or that he at least does more to make the fictional Thursday’s perspective distinct if she returns in future volumes.