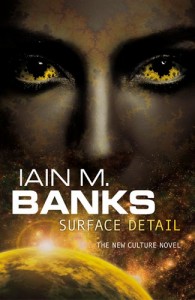 Surface Detail is the ninth book in Iain M. Banks’s Culture series, and the third I’ve read. As soon as I read the summary, I couldn’t wait to pick it up. Fortunately, the Culture books are generally standalone stories, so it was easy to skip ahead.

The book has a good half-dozen plot threads that run concurrently, all somehow touching on the effects of technologies that have made it possible to back up a person’s “mind-state”, essentially a digital recording of their soul. Once a mind-state is backed up, it can be “re-vented” into a new body, or consigned to a virtual afterlife, some of which are decidedly unpleasany. Naturally the disposition of digital souls has huge social, political, and religious implications. The issue of virtual hells is a controversial one, and a war has broken out in the galaxy between The Culture (among others) and societies who believe it is their right to send the digital dead to eternal damnation.

The main thread of the book focuses on Lededje Y’breq, a young woman who is an indentured servant of the most powerful man in her society, Joiler Veppers. She is more than just a slave, however; her society has a form of indenture that involves a full-body tattoo genetically etched onto every cell in her body. She is an “intagliate”, and is marked with both an exotic beauty and an ever-present reminder of her status as chattel.

When Lededje tries to run away from Veppers, he hunts her down and stabs her to death in a sudden rage. However, what neither Lededje or Veppers realize is that The Culture has taken an interest in her plight. After she is murdered, she awakens on a Culture ship light-years away and discovers that all of her memories are intact, along with a pressing need for revenge. Events in the book are set into motion when she begins the journey back to her home world to exact that revenge.

Some of the story takes place in the real world, some in virtual worlds simulating an endless war, and some in the virtual hell run by an alien society. The story jumps wildly from place to place and character to character. We are introduced to so many fascinating people and exotic places over the course of the book, it is sometimes hard to keep track of everything as it flies by. The book is basically impossible to summarize succinctly, and must be read to truly be experienced. The plot is twisty and full of misdirection, but rewards a patient and attentive reader.

I listened to the Audible audiobook version of Surface Detail, which is narrated by Peter Kenny, and I would highly recommend experiencing the book that way. Kenny does a fantastic job of giving each character a unique voice and temperament, and that made it a lot easier to keep the huge cast straight in my mind. Also, one of my absolute favorite parts of the book was only made possible by his narration. Near the end of the book, a normally sedate alien – who Kenny gives a cutesy high-pitched voice – starts becoming seriously pissed off when his plans start falling apart. The alien becomes so foul-mouthed and sarcastic that I couldn’t help but laugh out loud. I was pleased to find out that Kenny does the narration for all of Banks’ novels on Audible, so I’ll definitely be picking up another one sometime soon.

I think my only criticism of the book is that the ending falls a little flat. Although all of the disparate threads do end up connecting in some fashion, it still seems like an awful lot of fuss for something that feels a bit anticlimactic. However, I enjoyed the ride up until that point so very much that I wouldn’t necessarily discount the resolution for not quite adding up.

Surface Detail is a hell of a book. It manages to discuss incredibly complex moral and philosophical issues in an engaging and entertaining way, all while throwing in a bit of action, terror, and humor for seasoning. It’s another fine slice of Banks’ particular brand of space opera, and if you’ve enjoyed previous Culture books, I think you’ll definitely enjoy this one.

P.S. If you’ve never read a Culture book, the Kindle version of the first book in the series, Consider Phlebas, is 99 cents for the month of April!