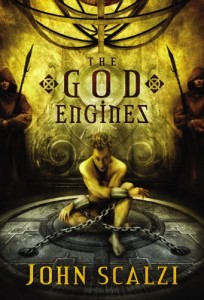 John Scalzi is commonly known as an author, a prolific and long-established blogger, a man with a mischievous sense of humor, and a connoisseur of all things bacon-related. I’m not entirely sure where I first came across his work, but as soon as I finished reading Old Man’s War, he instantly became one of my new favorite authors. I worked my way through the rest of his books and so thoroughly enjoyed them that I was inspired to check out the work of one of his clear inspirations, Robert A. Heinlein.

Up until just recently, all of Scalzi’s fiction output was fairly easily categorized as science fiction. Sometimes it was militaristic, sometimes funny, but all of it generally involved space travel, future societies, aliens, and other common sci-fi tropes. Accordingly, when he announced that he would be publishing his first fantasy work, The God Engines, I was intrigued. It’s always fascinating when an author you love decides to branch out into new territories. However, I do remember him cautioning his fans that it was particularly dark fantasy, and would probably surprise anyone used to his existing work.

After finishing the book, I can see why he felt the need to warn his readers about a possible bumpy ride. It’s a short, sharp, brutal window into a particularly cruel and twisted society. None of Scalzi’s trademark humor is present, the characters are all deeply flawed individuals, and the climactic events are so gruesome that I would not be surprised to find the book filed under “horror”.

The God Engines tells the story of a society that uses captured gods to power its starships. In this world, gods are very real creatures, sustained by the faith and prayer of their followers, but subject to the machinations of more powerful deities. When a society is conquered, the citizens aren’t simply converted to a new religion; as a further indignity, their former god is enslaved and bent to the task of providing interstellar travel to the conquering faction.

The main character, Ean Tephe, is the captain of a ship powered by a particularly nasty and recalcitrant god. The very first thing Ean does in the book is whip his starship’s captive god for disobedience. Ean is a true believer in his society’s way of life and in his god’s grace above all others and generally comes off as a stiff-necked, unsympathetic hard-liner. The only real glimpse we get into Ean’s softer side is the time he spends with Shalle, one of the ship’s rooks, who are essentially nuns, therapists or prostitutes depending on the situation.

The most noteworthy thing about Shalle is that the character is never described with gendered pronouns. It’s never quite clear if Shalle is a woman, man, or something else entirely. Ultimately, however, this is a bit distracting, and I was never quite sure how Shalle’s lack of apparent gender played into the story other than as a method of subverting our expectations. The end result is something that read more like a formal exercise in gender-neutral storytelling instead of genuine world-building.

The main plot of the book is set in motion when Ean is sent on a secret mission to an unconverted world that his god has secreted away from its enemies. Ean’s ship is tasked to travel to the distant world and open up a portal for his god so that it can convert the citizens to believers and become more powerful from their new faith. However, Ean’s experiences on the unconverted world shake his personal faith to its core, and events only snowball from there.

To be honest, The God Engines is a hard book to enjoy. The main character isn’t particularly likable, his actions are in service to a clearly corrupt society, and the end results are particularly horrifying. Scalzi doesn’t pull any punches here, but as far as I can tell, that’s the main point.

In a way, it makes sense to think of The God Engines as a writing exercise in novella form; that isn’t to say it’s an unpolished or unfinished book, however. Rather, it seems perfectly designed to let Scalzi step outside of his comfort zone and play with a new storytelling palette.

Unfortunately, although it may have been a useful experience for him as a writer, it didn’t really work for me as a form of entertainment. Although I do enjoy stories that go to dark places, I usually need someone or something to root for, and Captain Ean Teshe is not that man. The book might still be an interesting read for the Scalzi completist, but I can’t really recommend it to anyone who isn’t a hardcore fan.