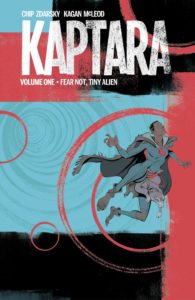 Kaptara is very weird and very funny. Both come with the territory when Chip Zdarsky is at the helm, but Kaptara makes Zdarsky’s work on Howard the Duck seem downright traditional. At a basic level, Kaptara is a foul-mouthed piss-take version of classic pulpy sci-fi adventure stories, but it also features a diverse cast and bizarre, gorgeous art.

When the ship Kanga is sucked into a strange anomaly in space, it crash-lands on Kaptara, an alien planet full of hideous monsters and dangerous locals. The Kanga’s crew is separated and some of them are gruesomely murdered, but one man – a bio-engineer named Keith – manages to escape with his life despite his penchant for sarcasm and cowardice. Although Keith initially resists the call to adventure, it isn’t long before he’s on a mission to stop a villain named Skullthor from overthrowing the Earth.

Kaptara is laugh-out-loud funny throughout, but Zdarsky also lets a few poignant moments peek through the silliness. Keith is a misfit who feels like he doesn’t fit in back home, and he doesn’t fit in with his crew, either. After he crash-lands, Keith meets a new band of weirdos and misfits who all seem far more comfortable in their skins than he could ever be, and I’m sure he’ll do a bit of learning and growing as he adventures on Kaptara.

The book has a bit of everything thrown into the mix, including several foul-mouthed characters who feel somehow anachronistic even though the setting is a futuristic alien planet (where they’ve probably had swearing for millennia). There’s even a little murder mystery to keep things interesting.

I loved Kagan McLeod’s character designs and art throughout. The world of Kaptara is full of vibrant colors and strange creatures that look like nothing I’ve ever seen. “Cat tanks” are the primary mode of transportation on Kaptara, and if you’re picturing elephant-sized hairless cats with smushed faces and convenient tank treads, you have the right idea.

I’ll probably read anything Chip Zdarsky writes at this point, but it’s nice to know that he delivers more often than not. I’m looking forward to reading more about the strange world of Kaptara, and definitely recommend picking up this first volume.