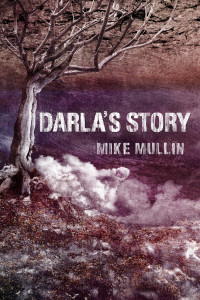 Darla’s Story is a novella that provides a bit of back-story for a character in Mike Mullin’s Ashfall trilogy. I haven’t read the trilogy, but the author meant the novella to stand alone as a complete work, so I read it with that in mind.

I instantly liked the fact that this story features an Iowan farm girl as its main character. I also liked that it doesn’t take place in a far-flung dystopian future. Instead, it occurs immediately after an apocalyptic volcano eruption (with a real-world basis!) covers the entire US in falling ash. Midwesterners and the mid-apocalypse aren’t common tropes in YA (at least not the books I’ve read), so I found the novelty intriguing.

The story follows Darla and her mother as they work to survive in the aftermath of the eruption. Theirs is very much a contained apocalypse, focusing as it does on the minutiae of day-to-day survival for two people stranded in the country. Luckily, Darla is mechanically inclined thanks to her late father’s influence, so she’s one of the best people to get stuck with in an apocalypse. As soon as the eruptions stop, she starts fixing necessities like the water pump and her tractor.

Ultimately, volcanic ash is the primary antagonist in Darla’s Story. Interpersonal conflict only comes into play very late in the action, and it’s really just a complication in Darla’s fight against the endless ash-fall.

To be honest, a little man versus nature went a long way for me. After a few chapters of fix-it work, I was impatient for a more personal conflict. I wanted something to happen that might push Darla out of her bubble.

When the outside world does finally intrude on Darla’s life, it feels more like a frustrating inconvenience than a dire misfortune. In fact, a lot of the stakes in this story feel strangely low. Despite the apocalyptic setting, Darla is both capable and determined, and it never seems like she is in immediate danger.

I think a lot of my impatience with this story stems from the fact that it really does only function as a prequel to a larger work. If Darla’s Story was a screenplay, this novella would be maybe 90% of the first act. It’s everything leading up to the part where Darla finally leaves her ordinary world and goes on a quest. The problem is that Darla can’t get to that point here because the meatier action happens in the main trilogy.

Even though I feel like Darla’s Story doesn’t actually work as a standalone piece, I enjoyed the character and setting. Reading Darla’s Story was enough to piqué my interest in Ashfall, but I’m not sure it’s a great starting place for the overall series. It probably works better as a way to fill in back-story after you’ve read the main series.

As for the audiobook, I thought the narrator was perfect for the character. I’d definitely recommend listening to Darla’s Story in audio form if you do pick it up.

Full disclosure: I received a free review copy of this book from the author.