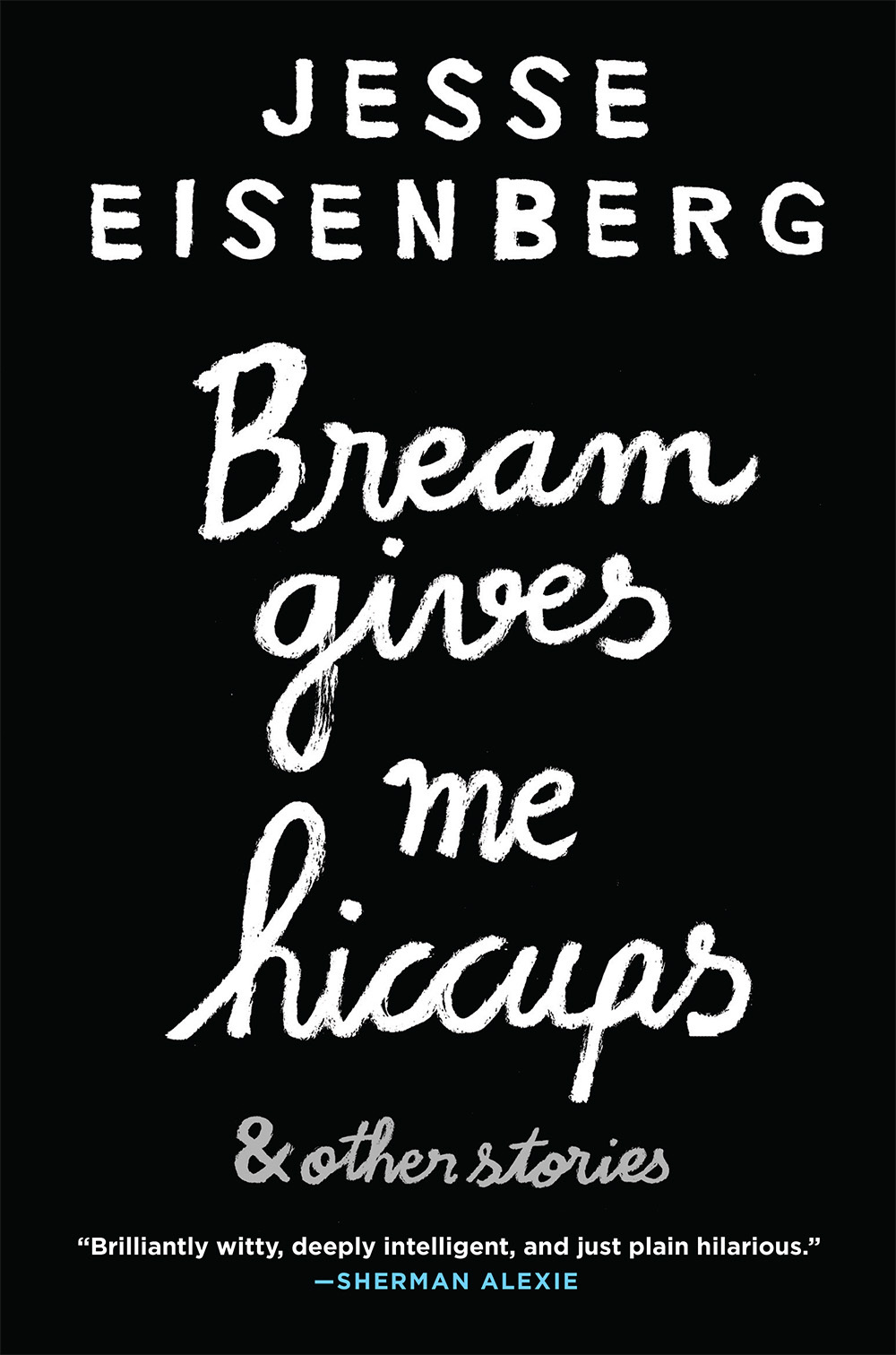 Bream Gives Me Hiccups is actor Jesse Eisenberg’s debut short story collection. Although it doesn’t feel like a vanity project, it is definitely a little derivative. Eisenberg’s work is in the same wheelhouse as Woody Allen’s short fiction, and doesn’t always fare well by comparison.

Most of the stories in Bream Gives Me Hiccups are slight comic riffs on a premise. The joke is oftentimes spelled out in the story’s title. When these shorter pieces are good, they deliver some of the best laughs in the collection. When they’re bad, they’re almost entirely forgettable.

Included with the short pieces are two longer stories that appear at the beginning and middle of the collection. The title story, “Bream Gives Me Hiccups”, is one of the best in the collection. The second long piece, “My Roommate Stole My Ramen”, is easily the worst.

One thing Eisenberg does to set himself apart from Allen is make his characters seem like real people with emotions. He only succeeds intermittently, but when he does, the stories are particularly good. Allen is by far the better writer, but the characters in his fiction were always held at arm’s length.

Section I, “Bream Gives Me Hiccups”, is framed as a series of restaurant reviews by a nine-year-old. Each review quickly devolves into a rundown of the main character’s life and troubles – with his divorced parents, his best friend, and the kids at school – and the result is both hilarious and affecting.

Section II, “Family”, mostly consists of a series of extended jokes from the perspectives of Eisenberg’s family members (real or imagined). There are a few standouts here: “Separation Anxiety Sleepaway Camp” is an absurdist exploration of childhood neurosis, and “My Nephew Has Some Questions” is by far the best example of Eisenberg committing to the game of a joke.

Section III, “History”, is all bits and no characters. I remember laughing once or twice at this section, but the stories didn’t leave much of an impression. Also, the joke in “Marxist-Socialist Jokes” is that they’re all non-jokes, which is just annoying.

Section IV, “My Roommate Stole My Ramen”, is where this collection went off the rails for me. In a series of letters to her high school guidance counselor, a spoiled freshman rants about everyone and everything in her life. There isn’t much of a narrative arc, and the main character doesn’t learn or grow by the end of the story. Eisenberg doesn’t appear to have any sympathy for this horrendous character, so it’s hard to understand why this story spends so much time with her. The end result is both tone-deaf and misogynist.

Section V, “Dating”, lands with a thud. I wasn’t particularly entertained by four variations on a bar pick-up, and found this section completely skippable.

Section VI, “Sports”, was also pretty lame. “Marv Albert Is My Therapist” is only mildly funny if you know who Albert is. “Carmelo Anthony…” is slightly entertaining because the Eisenberg character is completely delusional about his “pickup game”.

Section VII, “Self-Help” brings in some much-needed darkness with “Smiling Tricks” and “If She Ran Into Me Now…”, both of which feature delusional and/or downright psychotic main characters. It also helps that neither story overstays its welcome.

In Section VIII, “Language”, the best story is “My Spam Plays Hard to Get”, in which even scammers don’t want to steal from Eisenberg. “Nick Garrett’s Review” has a fairly obvious twist, and the remaining stories are unremarkable.

Section IX, “We Only Have Time for One More”, just feels unnecessary.

So, to summarize, although there are definitely worthwhile stories and the occasional bright spot in this collection, the second half almost sinks under the weight of unpleasant characters and unremarkable stories.

Full disclosure: I received a free review copy of this book from NetGalley, but I actually listened to the audiobook version from Audible. Go figure.