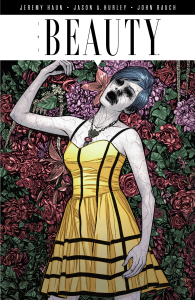 The Beauty Volume 1 has one cool idea and not much else: there is a new sexually transmitted disease that makes you beautiful. If you contract it, you become young, thin and pretty within minutes. The only apparent side effect is a constant low-level fever, so people go out of their way to get infected. It isn’t long before half the population has The Beauty.

There are factions who object to The Beauty for political and religious reasons, but the real problem is that people with The Beauty are starting to spontaneously combust and nobody knows why. When a woman combusts in public, two police detectives (one of them infected) try to find an explanation. They face opposition from government officials trying to cover it up and a shady pharmaceutical CEO who just wants to make a profit. The story turns into a by-the-numbers conspiracy thriller/mystery after only a few pages.

One of my biggest problems with The Beauty is that I didn’t care about the main characters at all. They are generic pretty people who only want to Solve The Crime And Stop The Conspiracy. Neither of them has an identifiable personality and their dialog is basically interchangeable.

The villains get slightly more characterization and/or back story, if only because we see them doing things that aren’t necessarily related to the case at hand. That doesn’t mean their motivations are clear, however.

One villain wears a skull mask and eviscerates his victims to show that he’s obviously a very bad dude, but his appearances in the story are all gore and no tension because his actions feel utterly impersonal.

When I finished reading this volume, I had to check to find out if it was a mini-series or an ongoing title. It felt like a complete (if underdeveloped) story, so I wanted to know if my instincts were correct. It turns out that it is an ongoing series even though the sixth issue wraps up a lot of threads and ends with a note of finality.

One thing I did like about The Beauty was the art. It has a clean, realistic style that emphasizes the absurd horror of spontaneous combustions. Unfortunately, the story doesn’t give the art much to work with, so the book feels slight and generic.

After reading so many disappointing comics with boilerplate stories and undeveloped characters, it’s starting to feel like a problem with the medium. There are exceptional writers like Matt Fraction, Chip Zdarsky and Brian K. Vaughan working in comics, but the ability to fully develop a character in a few panels seems like a rare talent.

Unfortunately, The Beauty doesn’t deliver on the clever idea at its core because the characters are personality-free and generic.