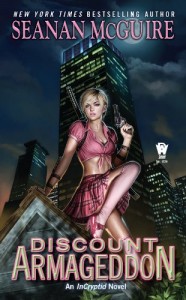 Discount Armageddon is the story of Verity Price, a blonde twenty-something cryptozoologist and recent transplant to New York City. She pays the bills by working as a waitress in a strip club, supports the family business by working to help the local populations of cryptids – monsters to the unenlightened – and secretly dreams of making it big on the ballroom dancing competition circuit. She hates public transportation, instead getting around by running parkour-style across the city rooftops, all while armed to the teeth with every kind of weapon she can hide under her skimpy waitress uniform. Oh, and her roommates are a colony of talking mice that venerate her every act with religious celebrations and feasts.

Things in the city are going swimmingly for Verity until the day she finds herself accidentally hanging from a snare set by a member of a monster-hunting sect called the Covenant. The Price family’s ancestors were part of the Covenant, but broke with the party line and decided to start helping cryptids instead of hunting them into extinction. Naturally, this didn’t endear them to the Covenant, and the Prices have been in hiding ever since. Complicating the situation is the fact that this Covenant member, Dominic, is strikingly handsome when he isn’t indiscriminately hunting and killing cryptids. Verity isn’t too happy about Dominic’s presence in the city, but when cryptid girls start disappearing and she hears credible rumors of a dragon – long though to be extinct – living under the city, they form an uneasy truce to stop the beast and sparks start flying.

In broad outlines Verity’s story feels familiar. It has the standard trappings of the urban fantasy genre: a secret world, hidden in plain sight, a main character with a special connection to that world, and a romance storyline involving a bad boy love interest who just needs a little redemption to make him boyfriend material. What makes it stand out are the unique details that McGuire works into the mix.

The mice in particular add a good bit of humor to the proceedings. They have dozens (if not hundreds) of religious ceremonies, all named for mundane events in Verity’s life, and all celebrated with a fervor that makes it difficult for Verity to have visitors. I also liked that there isn’t a single vampire or werewolf in the book. There are creatures who can switch between human and animal forms, but they all feel like off-the-beaten path choices, like the Japanese tanuki and an Indian creature called a madhura. Additionally, Verity’s background as a cryptozoologist isn’t just window-dressing; an important plot point revolves around actual biological processes becoming evident in one of the creatures she runs across.

The only real criticism I can come up with is that although title is catchy, I’m not really sure what it has to do with the actual story. In any case, Discount Armageddon is the first book in a new ongoing series for McGuire, and I look forward to picking up the future volumes. I’m also excited about reading her other books. She’s Hugo-nominated for her work as Mira Grant, and I’ve heard great things about her other urban fantasy series, the October Daye books. I get the impression that McGuire likes working with familiar tropes and genres while subverting them just enough to make them feel fresh and entertaining.