I’d like to talk about two short stories I read this week: one I loved, and one I found absolutely revolting.

The first, Driftings by Ian McDonald, is available in the January issue of Clarkesworld Magazine. I own The Dervish House – a 2011 Hugo nominee for Best Novel – but haven’t read it yet, so this was my first exposure to McDonald’s writing.

The thing I noticed almost immediately about this story was the language. McDonald definitely has a way with words:

Ocean cold was beginning to infiltrate the wetsuit but the slump of a wave, the side-slip of a gull on the air, the sudden hiss of eddying drizzle; all said stay, speak.

Driftings tells the story of an artist who lives in a seaside town and spends his time scavenging the shore for items washed away during the Japanese tsunami. He takes what he finds and builds bizarre sculptures in his house, which is almost entirely full of the sea’s detritus. One day he meets a mysterious girl… and I don’t want to say too much more than that.

The pleasure of the story rests in its simplicity, in the slow creeping otherworldliness that builds one paragraph at a time. McDonald doesn’t provide any kind of pat explanations for what is going on, and the ending throws a nice little curveball. Highly recommended. 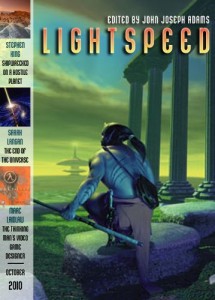 On the other end of the spectrum is The Taste of Starlight by John R. Fultz, which is included in the print and audio versions of Lightspeed: Year One. I’ve been listening to the audiobook version on and off for a few weeks now, and most of the stories so far have been pretty decent, with a few standouts like the Catherynne M. Valente story I discussed last week. I’ve found something to like about pretty much every Lightspeed story I’ve ever read or listened to, but there had to eventually be an exception, and this was it. It has certainly stuck with me, but not in a good way.

The Taste of Starlight tells the story of a doctor on a seven-year interstellar mission to a far-off colony. A systems malfunction causes his cryopod to open early, and he becomes the only person awake on the ship with more than a year left to go before landfall. He discovers that there aren’t enough emergency rations to last him for the whole trip… and I’m sure you’ve figured out where this is going.

I don’t remember exactly when I started guessing that he would resort to cannibalism, but it was definitely telegraphed pretty early on. Sure, the main character eats all the emergency rations first and does his best to live without food for as long as possible, but there comes a time when he decides that the “mission has to succeed” because a starving colony is depending on his expertise.

When he finally got around to eating someone, I checked the timer and discovered that I was only about a fourth of the way through the hour-long story. Checking the time in the first place is a bad sign, but I kept listening because I wanted to see what the author had to say that would take another forty minutes.

It turns out that most of this length consists of increasingly gruesome descriptions of the main character torturing, mutilating and eating his crew-mates. We are told that the ship isn’t equipped with cold storage (or backup cryopods, for that matter), so the doctor has to keep his victims alive to prevent the meat from spoiling. At first he sedates them, but eventually he runs out of medicine and stops caring. Then he starts taking culinary pleasure in the various body parts he’s eating, and the author goes out of his way to top himself with nauseating details in every paragraph.

Ultimately the story is just gratuitous. The basic structure is entirely predictable, so the only thing that makes The Taste of Starlight unique is a grotesque fixation on the particulars of eating a dozen human beings. If the author was trying to make a point about the potential horrors of space travel or the darkness hidden in the human soul, he drives it into the ground and then keeps going.