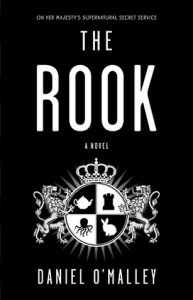 When the heroine of The Rook wakes up, she finds herself standing in a park in the pouring rain, surrounded by dead bodies and with no memory of her life or the events that led her to her current predicament. Luckily, the former occupant of her body, one Myfawnwy (pronounced “Miffany”) Thomas, was both meticulous and forewarned, and so she prepared for every eventuality by leaving two letters in the coat our heroine is wearing.

The first starts as follows: “The body you are wearing used to be mine.” Much of the novel unfolds as a one-sided conversation between the woman Myfawnwy used to be and the one she becomes after losing her memory. For simplicity’s sake, O’Malley refers to the latter as Myfawnwy and the former as Thomas.

Thomas lays out two options for Myfawnwy to follow: she can either assume a fake identity and hide from whoever is trying to kill her, or she can work to fit herself back into the role and identity of her “predecessor” and try to solve the mystery of her attack. Naturally, she chooses the second option, or else the novel would have wrapped up very quickly.

It turns out that Thomas is a high-level bureaucrat in a secret organization called the Checquy which devotes itself to controlling and covering up supernatural threats to the UK. She also has powers of her own, as do all upper-level members of the organization. Myfawnwy discovers those powers inadvertently when she is attacked a second time and uses them to knock out several more people at once. However, as she reads more into Thomas’ history, it becomes clear that she never quite lived up to her potential. Even though she could have been powerful, she preferred desk work to field work, and had a reputation for shyness.

The conceit of an amnesiac main character is an excellent way of introducing readers to the strange world of the Checquy. Myfawnwy’s coworkers run the gamut from her fairly normal corporate secretary to an entity called Gestalt who controls four bodies with one mind. O’Malley populates this world with strange and occasionally horrible details that live in uncomfortable proximity to each other.

Myfawnwy is also a fantastic character, frequently hilarious and always likable as she bullshits her way through departmental meetings and unexpected field work. The perspective bounces back and forth between Myfawnwy’s modern-day adventures and Thomas’ letters, which fill in backstory and handle a lot of the world-building. Myfawnwy is also surrounded by great characters in the present day, from her too-beautiful American counterpart who becomes a good friend, to the disgustingly unhinged villain who confronts her later in the book.

The Rook is commonly compared to a lot of other authors and books, but it’s definitely more than the sum of its influences. The best description I could come up with when summarizing the book for a friend was that it’s a bit like The Bourne Identity with Terry Pratchett’s sense of humor. if you’ve ever read anything by Tom Holt, I think his work is a fair comparison; he also enjoys mashing up mundane things like accounting with werewolves and vampires.

The one criticism I would make of the book is that Thomas’ letters consist almost entirely of infodumps. It makes sense for the character, and O’Malley mostly gets away with it, but I do wish the balance leaned more towards Myfawnwy learning about her world through footwork rather than reading those letters.

In any case, I loved the book, and am very excited that O’Malley plans on writing more books in the same universe. The Rook wraps of Myfawnwy’s story pretty neatly, so my guess is that future books might focus on other characters, but if he does choose to revisit this character at a later point in her life, I won’t complain.