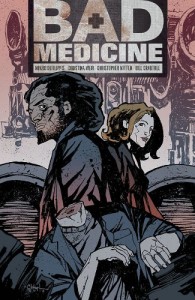 Bad Medicine follows disgraced former cardiologist Dr. Randal Horne and hard-nosed NYPD detective Joely Huffman as they work together to solve strange murders apparently caused by fringe science and exotic diseases. Also along for the ride are the ever-cranky pathologist Teague and his oh-so-snarky partner, Hogarth. The first collected volume of Bad Medicine includes two story arcs. In the first arc, detective Huffman discovers a dead man with an invisible head in an experimental lab, and tracks down Randal Horne to help solve the mystery. In the second arc, the CDC asks Horne and Huffman et al to investigate what appears to be a werewolf attack.

As I was reading Bad Medicine, I couldn’t help comparing it to Fringe, and it isn’t just because the mysteries are caused by weird science. It’s also the fact that the main characters are an eccentric, disgraced doctor who went on walkabout and a no-nonsense blonde female detective. Even still, that wouldn’t be such a big deal if Bad Medicine brought anything unique to the table, but it really doesn’t have much to offer in terms of originality. The first mystery seems stranger than it actually is thanks to a bit of misdirection from the villain, and the second is a fairly bog-standard werewolf story.

However, I did generally like the art in the book. It’s reasonably unique, stylized enough to be distinctive while still feeling fairly grounded. I did have occasional problems figuring out what was going on in panels that were either too stylized or laid out poorly, but I was usually able to decipher the action upon further reading. It may also have been a side effect of reading a digital version of the book. The real problem with Bad Medicine is that the writing is stilted and uninteresting.

The dialogue never feels very natural, and the cast consists entirely of stock characters without any real defining traits. Horne talks to a ghost and Huffman has a pet cat she dotes on, but the characterization doesn’t go much deeper than that. We’re told that Horne has a terrible bedside manner, but he never actually says anything particularly off-putting, so it’s hard to see how he got the reputation. One of the supporting characters, Hogarth, spends most of his time throwing out wisecracks that just fall flat or feel out of place, and he ends up coming off as a one-note attempt at comic relief.

Overall, Bad Medicine was a pretty forgettable read, and I definitely won’t be checking out future volumes of the series.