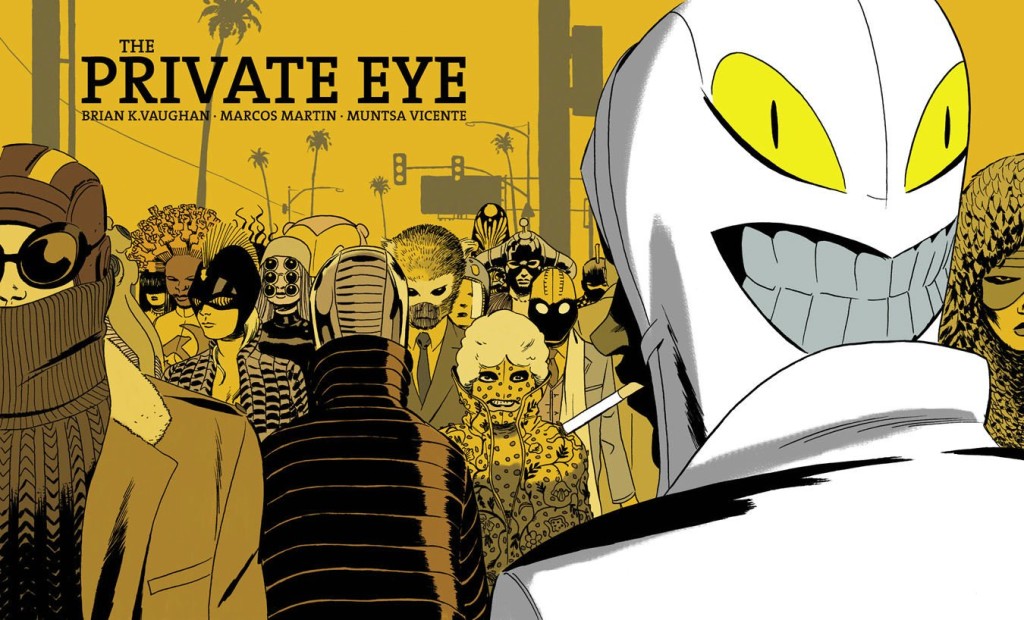 Brian K. Vaughan might be one of the busiest writers in comics, and every new project he announces is weirder than the last. The Private Eye was the first series published through Panel Syndicate, a digital-only, DRM-free, pay-what-you-want imprint that releases comics designed specifically for tablets.

The Private Eye’s 10-issue run was so popular and well-regarded that Robert Kirkman from Image Comics convinced Vaughan to let them publish a deluxe hardcover edition of the series. This all-in-one edition is probably one of the best ways to enjoy this limited series.

The year is 2076, and it has been decades since the “cloudburst” leaked everything stored in the “cloud” to the public and secret search histories ruined lives. There is no internet, no wi-fi, and iPhones are forgotten relics of the past. In another twist, the press handles law enforcement and is known as the “Fourth Estate”.

P.I. is an unlicensed paparazzi – a private investigator by another name – who keeps an office in the Chateau Marmont and spends his time trying to photograph adulterers despite the fact that everyone wears masks and uses pseudonyms to protect their privacy.

When a young woman hires P.I. to investigate her past and she almost immediately turns up murdered, the killers and the press target P.I., and he soon finds himself roped into an investigation into her death. He eventually uncovers a conspiracy that will change the state of the world as he knows it.

At its heart, The Private Eye is a fairly traditional murder mystery. The bizarre trappings – hologram tiger-heads and Luddite tendencies – are what make it stand out from the crowd, as does Marcos Martin’s kinetic art style. The Los Angeles setting is carefully drawn, with a number of details that make it feel believable and lived-in, which only adds to the noir flavor of this book.

However, the story doesn’t always make sense. For example, I’m still not entirely sure why the villain felt the need to murder the woman who sets off the main plot. I also never quite bought into the villain’s motivations in general; it felt more like Vaughan was trying to say something about the present day through a sci-fi lens and molded his bad guy to fit that narrative and not the other way around.

Overall, The Private Eye is a fast-paced and entertaining read. If you’re curious about the story and aren’t quite ready to drop big bucks on a collected hardcover, you can always buy digital copies very cheaply from the Panel Syndicate website.

Full disclosure: Although I received a free review copy of this book from NetGalley, I also purchased my own copies as they came out.