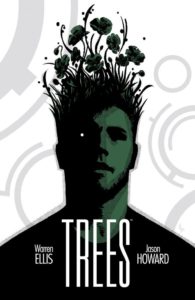 Trees has a simple premise and a massive scope. It asks: what would happen if aliens invaded Earth and then completely ignored humanity?

The book opens ten years after massive alien “Trees” landed on and crushed cities across the globe. The invaders never tried to communicate with humanity, and there were no obvious signs of life inside their impossibly tall alien pillars.

Many people fled from under the shadows of the Trees, but those who remained found new ways to live. New societies formed in these most unlikely of places, and this volume tells some of their stories.

The book shifts back and forth between perspectives in a handful of far-flung locations, including an artist’s colony in China, a research station in the Arctic, an Italian city in the grip of warring fascist mobs, and a border skirmish in Somalia.

Although Trees doesn’t match the tone or worldview of George R.R. Martin’s A Song of Ice and Fire, the narrative here is similarly ambitious and deeply concerned with the particulars of human behavior. This is, I think, the first time I’ve read a volume of an ongoing series that included eight issues in its first arc.

That scope and ambition is commendable, but it also means that the larger plot doesn’t have much forward motion. The Trees are essentially an enormous backdrop for more intimate, character-driven storytelling. The most compelling story told in this volume is about young love in a dangerous place.

However, despite the focus on character-driven stories, Ellis introduces so many characters at such a fast pace that I couldn’t tell you any of their names without referring back to the book.

Also, the pacing in this first volume is very measured, which makes me wonder how many issues Ellis and Howard have planned for the overall series. It looks like Trees is on hiatus and has been since December of last year, but Image says issue #14, which completes the second story arc, releases later this month.

As for Jason Howard’s art, it is chock-full of expressive characters and beautifully rendered cityscapes. My only real criticism is that several of the female characters look very similar, so I initially had a hard time keeping them straight in my mind.

If you’re the impatient type, it might be best to hold off on reading Trees for now, but if you’re into personal stories with a global backdrop, it’s definitely worth checking out.