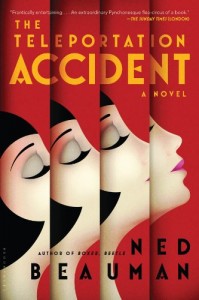 Egon Loeser, protagonist of Ned Beauman’s The Teleportation Accident, is an asshole. He’s obsessed with sex, contemptuous of his friends, hopelessly infatuated with a girl who doesn’t return his affections, and completely untalented as a theatrical director. In the hands of a lesser author, such an unlikable main character could be the fatal flaw that alienates most readers. However, Beauman makes up for Loeser’s bad behavior by populating the novel’s supporting cast with striking, sharply drawn characters and filling it with laugh-out-loud comedy throughout.

At the start of the story, Loeser is a set designer in decadent pre-war Berlin. Loeser’s 1931 is full of never-ending parties, desultory work on a play production that never seems any closer to performance, and an ever-vigilant search for good cocaine. The play he is working on is the story of the life of Adriano Lavicini, a seventeenth-century stage designer best known for the tragic accident that ended his career and life.

After the failure of Loeser’s stage device, he heads to yet another Berlin party, where he fortuitously runs into a girl named Adele Hitler (no relation). Loeser was Adele’s tutor when she was younger, and when he discovers the pudgy girl he knew has transformed into an incredibly beautiful young woman, he is instantly smitten. This encounter completely changes the course of Loeser’s life; he becomes obsessed with Adele and follows her first to Paris and then to Los Angeles.

As Loeser fruitlessly follows Adele around the world, he runs into a wonderful cast of characters, all of whom leap off the page. Loeser becomes a fan of the hard-boiled fiction of Stent Mutton and accidentally meets Mutton and his wife one day while wandering lost in California. Dolores Mutton, Stent’s knock-out wife, is beautiful but also incredibly terrifying, later threatening Loeser with death in no uncertain terms. Loeser ends up living in the guest house of one Colonel Gorge, a gruff, powerful man who is suffering agnosia, which causes him to confuse pictures for the real thing – hold up a picture of a woman, and he becomes convinced she is there in the room. The book also includes a few chapters from other perspectives; in one, Beauman focuses on a con artist named Scramsfield, who gets Loeser caught up in one of his scams. In another, Beauman tells the story of the surprisingly unhinged Dr. Bailey, whose fraught personal history has influenced the unconventional means and methods he uses to research teleportation.

Even if The Teleportation Accident occasionally rambled, I was always drawn back in by Beauman’s flair for characterization and comedy. I laughed out loud a good dozen times throughout, which is a rare achievement for any book. The only real criticism I’d level against the book is that the opening pages are needlessly obtuse; I wouldn’t be surprised if a number of readers put it down at the beginning out of a worry that the novel would continue at that pitch throughout. Thankfully, once Beauman settles down and gets to business, The Teleportation Accident is a thoroughly readable and highly enjoyable book.