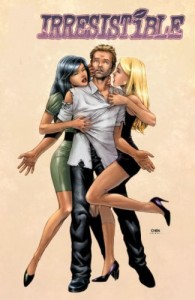 I’m honestly not sure what I was expecting when I requested a copy of Irresistible from NetGalley. Maybe I thought it would handle a clichéd male fantasy in an interesting way. After all, Y: The Last Man spun out a masterpiece with similar material. Unfortunately, I was sorely mistaken.

The next day, a pretty barista surprises Allen in the bathroom and bangs his brains out. He seems to enjoy this, but his constant narration makes sure to remind us that his nightmare is only beginning – not because he feels guilty, mind you, but because it isn’t exactly what he wants. Every woman he meets – leggy, buxom model-types, of course – immediately jumps his bones… but the only woman he wants, his ex, won’t have him. Naturally he calls her and shows up at her house uninvited like a creepy stalker, but that doesn’t change her mind. Go figure.

The story only gets more unpleasant as it goes along. One of his conquests shows up at his apartment and starts cutting herself when he isn’t immediately happy to see her. Woman start fighting each other for his attention, and the sex starts happening against his will. Never mind that all the women he’s having sex with were brainwashed by a spell, of course. That’s consent, right? The climax of the story is entirely gruesome and only confirms that we’ve spent way too much time with a self-centered sexually obsessed sociopath.

This book misses the mark as a cautionary tale by a wide margin. The main character is a jerk from the start, the women are cartoonish sex-bots, and the resolution is both nasty and predictable. As for the art, it was competent but nothing special. It’s a rare book I hate so completely, but this one wins the prize.