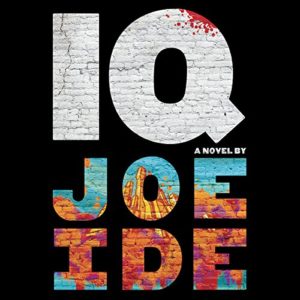 Joe Ide’s debut novel, IQ, won’t revolutionize the detective genre, but it does tell an entertaining story about well-drawn and complex characters. It wasn’t the most exciting crime novel I’ve ever read, but I’d be happy to follow the future exploits of Isaiah Quintabe wherever they lead.

Isaiah – IQ for short – is a smart, talented guy whose life changed tragically when a hit-and-run driver killed his brother, Marcus, right in front of his eyes. Before his brother’s death, Isaiah might have gone on to college and great things, but that all fell apart in an instant.

After the accident, Isaiah withdrew into himself, living alone in the apartment he’d once shared with his brother and hoping that social services wouldn’t come for him. When his money ran out and it reached the point that he might lose the apartment, he offered a room for rent to a kid named Dodson in a moment of desperation. Their uneasy friendship would soon have wide-reaching affects on both of their lives.

IQ jumps back and forth between 2005, when Isaiah and Dodson take up a life of crime that escalates with deadly results, and 2013, when Dodson brings Isaiah a case to solve the attempted murder of a dissolute rapper by a hitman with an enormous pit bull.

The best parts of IQ are the characters and the world they live in. Isaiah and Dodson are friends first by necessity, but as they try to solve a case together as adults, it becomes clear that their friendship runs deeper than their youthful robbery spree.

The actual case feels a bit low-stakes because the potential victim is an asshole burnout rapper doing his best to alienate everyone he knows. It’s hard to have much sympathy for a millionaire too doped out of his mind to think straight. That said, the villain is definitely creepy, and the unique detail of having him breed and train pit bulls is off-kilter in a particularly LA way.

Isaiah is a bit of a DIY detective, almost entirely self-taught after he dropped out of high school. When he solves a mystery, it doesn’t feel like another example of the Smartest Guy in the Room throwing his weight around. Instead, he uses inductive reasoning and makes his best guesses at likely outcomes, not always with perfect results.

IQ is a quick, entertaining read, and the audiobook has an excellent narrator. I enjoyed the book, and I’ll probably pick up the sequel, but it isn’t at the top of my list.

Full disclosure: I received a free review copy of this book from Net Galley, but I listened to the audiobook from Audible.