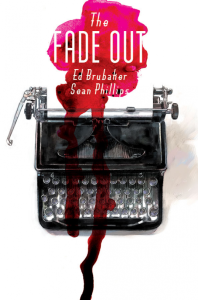 The Fade Out, Volume 1: Act One

The Fade Out is a tale of bad old Hollywood, when studios covered up all varieties of crime and young actresses faced near-constant sexual assault on the ladder to stardom. It definitely made me wonder how much has changed and how much has stayed the same since the 1940s, when this story takes place.

Charlie Parish is a screenwriter with a few dark secrets who wakes up one morning after a debauched party to discover a promising young actress, Valeria Sommers, strangled in her own home. Charlie decides to get himself the hell out of there – hiding any evidence of his presence before he leaves – but when the movie studio he works for spins the murder as a suicide, Charlie’s guilt and horror only increase.

Ed Brubaker and Sean Phillips love a good noir. I haven’t read all of their work so far, but The Fade Out is one of their most grounded stories. It’s an unflinching look at the seamy underbelly of classic Hollywood, led by a conflicted non-hero who struggles to figure out what to do. The book also particularly focuses on the ways women were horribly mistreated during that time period, both in and outside the film industry.

Brubaker’s dialogue crackles, Sean Phillips’ character designs are bold and spare, and Elizabeth Breitweiser’s colors are the perfect accent that brings it all home. Charlie views the world through thick round glasses that dwarf his face. His writing partner, Gil, slumps his way through every scene, rumpled and dissolute. Valeria and Maya, her lookalike replacement on the picture, both have fresh, open faces and expressive mouths that make it easy to imagine them as long-lost Hollywood starlets.

Although The Fade Out starts with a murder mystery, it seems content to wander through old Hollywood, introducing a slowly expanding cast of characters without pushing Charlie into his ostensible role as citizen detective. It seems clear Brubaker is playing a long game and enjoying the scenery along the way.

My only criticism is that the third issue features so much female nudity that it verges on the exploitative. It’s clear that Brubaker is criticizing a system that puts women into situations that force them to use their bodies as currency, but the amount of naked flesh on display begins to undermine his point.

Even still, The Fade Out is an excellent slice of noir from creators working at the top of their game. Definitely worth checking out.