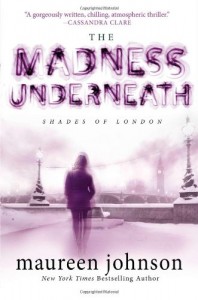 The Name of The Star, the first book in Maureen Johnson’s Shades of London series, ends with the main character, Rory Devereaux, discovering new powers that may change everything about her relationship to the spirit world. It’s an exciting end to an intense book, and it definitely sets up potential new storylines for what felt like a fairly self-contained story.

Johnson has publicly stated that she has a total of four books planned for the series, so The Madness Underneath needs to both follow-up on the first book and set up enough threads to make books three and four worth reading. With all that on order, does it deliver? The short answer is: kind of.

The Madness Underneath picks up a few weeks later as Rory is living with her parents and recovering from her ordeal. She’s been going to a therapist, which she hates because she isn’t allowed to actually talk about the truth. The government has covered up what actually happened with the Jack the Ripper copycat from the first book and nobody would believe her if she told them the truth in any case. Rory mostly just wants to return to Wexford to be with her friends and maybe get back in touch with Stephen and the rest of his ghost-hunting squad.

When Rory accidentally exorcises a ghost with her new powers, it doesn’t take long before she’s back at Wexford and under the watchful eye of the government’s secret paranormal squad. At this point it would be safe to assume that the main mystery plot would get underway, but instead the book largely focuses on Rory’s PTSD. She’s way behind in school and can’t work up the urge to get caught up. She’s dating Jerome but she’s no longer sure why. Eventually Rory goes to a new therapist after Charlotte, her overachiever classmate, gushes about how much the therapist helped, but the mystery plot remains elusive throughout.

Rory does eventually have to use her talents to exorcise some more ghosts, but those exorcisms never amount to a major story thread. By giving Rory the ability to banish any ghosts with a touch, Johnson has made it so that no ghost like the Ripper could ever threaten her again. The problem with that is that it means Rory needs a new, more serious threat to fight against, and for most of the book the only threat is her depression and general lack of direction. It doesn’t make for very compelling reading.

Ultimately the book just felt like a transition. Rory deals with her PTSD, deals with Wexford and then gets a reason and a purpose to pursue in the next book. The book ends on a cliffhanger that leaves a few major threads unresolved, and although I probably will continue reading the series, I’m disappointed that this installment doesn’t have enough to recommend it and make it stand alone.