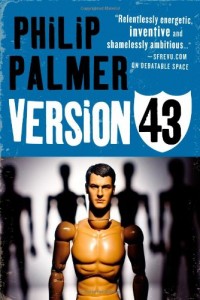 Version 43 is a weird book. If the reviews on Goodreads and elsewhere are any indication, it’s the sort of book that inspires polarizing reactions.

It’s long at over 500 pages. It’s gory, vulgar and occasionally squick-inducing even though it isn’t at all dark or gritty. It has a weird structure; at several points in the narrative it seems like the book can go no further, surely a climax or resolution is coming soon, and then Palmer tops himself yet again. That said, it isn’t at all exhausting, and I certainly didn’t feel like it wore out its welcome. I read it in a few marathon sessions, and although I wasn’t sure what to think of it at first, it thoroughly won me over by the end.

Version 43 is a Galactic Cop and a cyborg. He was originally based on a human being, but he doesn’t know who he was before, and it has been centuries since he felt at all human. Every time he dies in the line of duty (and this has happened 42 times before) he is reborn in a new cyborg body with a backup of all his crucial data and memories, yet somehow each version is never the same. He is sometimes ruthless or callous, and he is thoroughly intractable when it comes to dispensing his version of the law. He deletes emotions he finds inefficient, and is always on the job.

The book opens on the planet of Belladonna, where Version 43 goes to solve a bizarre and gruesome murder that has claimed the lives of five people. He arrives in town and immediately starts ruffling feathers and killing people at the drop of a hat. At first Version 43 feels like a bit of an old west gunslinger story. The main character’s only concern is tracking down murderous gangsters in a lawless frontier town. Then, he dies, and the story gets much stranger. The book cuts away to the story of a bizarre alien creature called the “hive-rat”, and at first it isn’t at all clear what this has to do with the story of a cyborg officer. Then Version 44 arrives on Belladonna and the cycle starts all over again.

As the book continues, Palmer piles weirdness upon gore upon philosophy upon quantum physics and the resulting lumbering mass gains momentum until it is an infinitely strange, wonderful and oftentimes hilarious book. Although the content is occasionally gruesome, the tone is always light, dancing over the atrocities committed on every page. I’m not sure who I might recommend this book to; it feels like an acquired taste. Even still, I’ll definitely be checking out more of Palmer’s work.