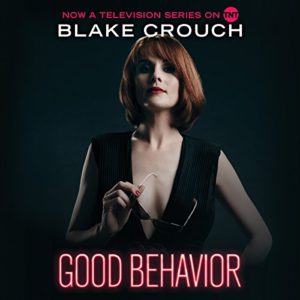 These stories were originally published as three separate novellas over the course of a few years. As of 2016, they are also the basis for a TNT series starring Michelle Dockery in her first post-Downton role in an ongoing series. This volume collects the stories along with author commentary.

However, unlike other book adaptations, I think I might recommend watching the show before reading Good Behavior. These stories read a hell of a lot like the rough draft of the show, and might best be appreciated with that in mind.

Crouch’s commentaries reinforce this impression. He discusses how he and the show’s co-creator adapted and cannibalized each story for the show, and it’s obvious that he thinks the adaptation is an improvement.

He points out more than once how the stories as written didn’t match the tone of the show or how tweaking events and characters for the adaptation opened things up in new and exciting ways.

As I listened to the audiobook, I oftentimes found myself thinking “Letty wouldn’t do that” or “this isn’t a Letty story”. Michelle Dockery’s portrayal is so compelling that I couldn’t picture the character any other way.

That said, I did enjoy reading Good Behavior. That’s especially surprising after I gave up on Crouch’s Wayward Pines trilogy after two books. I just couldn’t work up the energy to care about the finale, and I barely enjoyed the second book.

It helps that Letty is a much more interesting and likable protagonist than the main character in Wayward Pines, who spends most of his time hitting his head and blacking out. Also, it felt like Crouch had a better handle on style and language in these stories. He pulls off a few clever turns of phrase here and there that add a nice noir flavor.

Ultimately, I do recommend picking up Good Behavior, but only as supplemental material for the show and not a true standalone work. In fact, this collection is entertaining enough that I’m willing to give Crouch another chance, especially since he had a hand in writing the show.

Full disclosure: I received a free review copy of this book from NetGalley, but I listened to the audiobook version.