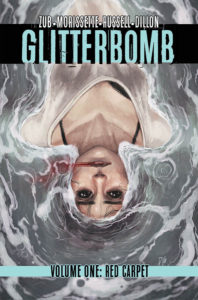 I’ve lived in Los Angeles for just over three and a half years now, so obviously that means I can consider myself an expert on the city, as is traditional.

Therefore, with my sacred powers as an Angeleno, I’ve decided that satires and takedowns of LA only work if they come from a place of love. If you’ve got nothing but hate for Los Angeles, if you can’t see even one iota of the appeal of this ridiculous city, then your critique will probably come out sour and clichéd.

Or, in any case, that was my reaction to reading the first volume of Jim Zub’s Glitterbomb.

In Glitterbomb, we meet Farrah Durante, a struggling middle-aged actress only minutes from destitution. Her sole claim to fame was a small recurring role on a cheesy sci-fi show many years ago, but after the show fired her, nothing has gone right since.

That all changes when she tries to drown herself in the ocean and a horrifying vengeance monster possesses her, giving her the ability to eviscerate anyone who has wronged her. At first, the unexplained black-outs and gruesome murders confuse and horrify her, but it isn’t long before she gives herself over completely to the monster’s dark desires.

Glitterbomb reads like the author visited LA once, hated it, and then funneled that hatred into a takedown of easy targets.

It’s common knowledge that actors are oftentimes horribly mistreated and that the industry is especially bad for women who no longer look like twenty-somethings, but that also means that it is an over-used cliché. Throwing in a monstrous twist isn’t even a particularly new idea, but it is what gave me a glimmer of hope about this book.

The fact that these tropes are familiar wouldn’t matter if the execution brought something new to the table, but Zub’s writing completely misses the mark. My theory is that it’s because he can’t seem find anything to love about LA.

In fact, there are any number of Hollywood satires and critiques that feel both more realistic and more powerful because they understand the allure of Hollywood without immediately holding the city and those who love it in contempt.

For example, FX’s Better Things focuses on a middle-aged actress trying to balance family life with an acting career, but it’s obvious that she loves what she does, despite the terrible people and sometimes crushing grind. It tells a far more well-rounded story by focusing on a main character who has a complex love-hate relationship with a difficult industry.

All that Glitterbomb has to say about Hollywood is that aspiring actors are shallow idiots who want fame and validation for the sake of it, and movie producers are nothing but predators.

Farrah doesn’t even have a compelling character arc in this first volume; she switches gears from despairing to malevolent with little to no build-up – it almost felt like I missed an issue – and then the book ends in a way that feels both rushed and inconclusive. I have absolutely no idea where Glitterbomb might go after this volume, but that isn’t an exciting prospect.

I also thought the art was wildly inconsistent throughout. The characters sometimes looked like completely different people from one page to the next, and I had no idea that Farrah’s babysitter was black until her mother said something her race.

This is the second Jim Zub book I’ve read and found disappointing, so I probably won’t pick up any more of his work.