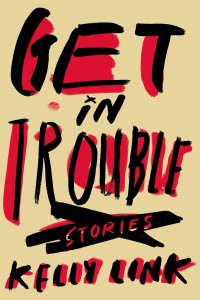 Get In Trouble: Stories by Kelly Link

Kelly Link has a knack for expertly juxtaposing weirdness with the mundane, and it’s basically catnip for my reading soul. Get in Trouble is no different.

However, one thing I noticed as I read is that only a handful of these stories are terrifying, which is a change from the norm. Link never really writes flat-out horror, but she has a way with chilling details and building suspense.

Although her talent for disturbing atmosphere does still come into play, Link spends most of her energy creating real, lived-in characters that leap off the page. In many ways, Get in Trouble finds her in transition; it’s still odd and unsettling, but it’s also some of her most accessible work.

The audiobook version, narrated by a full cast, features both familiar and new voices, some of whom are better than others. Tara Sands, who reads Secret Identity, is probably my favorite of the bunch. Ish Klein, who reads The New Boyfriend, has a high-pitched voice and staccato delivery that actually adds to the strangeness of the story. The only narrator I had some trouble with is Susan Duerden, whose odd cadence and breathy voice was very distracting at first.

“The Summer People” read by Grace Blewer
Fran and her (alcoholic, absentee) father are caretakers for vacation summer homes. Most of the time this just involves cleaning up after out-of-towners, but sometimes Fran has to deal with a different and far more dangerous type of summer people. This story starts out slowly, but Link steadily builds the danger and weirdness until delivering a punch of an ending. My only complaint is that the audiobook narrator completely ignores Fran’s accent.

“I Can See Right Through You” read by Kirby Heyborne
The Demonlover, aging star of a massively popular supernatural romance, reconnects with his former co-star/girlfriend as she films a TV segment about mysterious disappearances at a nudist colony. This story actually manages to humanize a celebrity couple who bear a very strong resemblance to Kristen Stewart and Robert Pattinson. That said, the story opens with a prologue that feels completely disconnected from the main plot, and the ending is both sudden and unexpectedly surreal. I enjoyed the middle, but I’m still not quite sure what to think about the rest of this story.

“Secret Identity” read by Tara Sands
Told in the form of a confession and an apology, this story relates the adventures of a sixteen-year-old girl who travels to a New York hotel to meet a man more than twice her age under false pretenses. When she arrives, she discovers that the hotel is hosting two conventions: one for dentists, and another for superheroes. Much to her dismay, everyone assumes she is there to audition as a sidekick. Easily my favorite story in the entire collection; the main character is sympathetic and relatable even when she does terrible things. I also loved how Link plays with the idea of “secret identity” throughout.

“Valley of the Girls” read by Robbie Daymond
Decadent rich kids fight and fuck and build pyramids to house all of their worldly goods while lookalikes called “faces” make public appearances in their names. This story felt a bit overstuffed – too many disconnected ideas and not quite enough character development. Either “faces” or the Egyptian aspects of the story would have been enough to carry it, but both together are a bit too much. Ultimately Link doesn’t spend very much time exploring the concept of “faces”, so it just ends up confusing things.

“Origin Story” read by Rebecca Lowman
A small-town waitress spends the night with her former boyfriend, a now-famous superhero, at a dilapidated Wizard of Oz theme park. They have sex and talk about life, slowly but surely revealing shared histories and the intimacies of a long friendship. As they speak, we get glimpses of the strange world around them, full of mutants and people with superpowers. This story was a little willfully confusing at first, but once I got into the world, I definitely enjoyed it.

“The Lesson” read by Cassandra Campbell
Tan and Harper decide to attend a wedding held on an island despite the fact that their surrogate, Naomi, is in danger of delivering their baby prematurely. This is definitely the most realistic story Link has ever published, but there are still a few quirky touches and moments of strangeness. I liked this story, but I spent the latter half waiting for supernatural occurrences that never arrived.

“The New Boyfriend” read by Ish Klein
Immy and Ainslie are best friends, but Immy kind of hates Ainslie for getting everything she’s ever wanted and more. Especially her “boyfriends”, which are actually lifelike robots entirely devoted to their owner. When Ainslie receives a new boyfriend for her birthday, Immy’s jealousy overwhelms her, and she takes drastic measures. This was probably my second-favorite story in the collection. The narrator’s flat affect and unreliability paired well with the creepy concept of a “ghost boyfriend” who might be possessed by a real ghost.

“Two Houses” read by Susan Duerden
Astronauts on a long-haul spaceship – the House of Mystery – tell ghost stories during one night of their years-long trip to Alpha Centauri. This story was a mix of sci-fi and the supernatural, and although it builds to a particularly creepy moment at the end, it mostly relies on atmosphere and not plot or character.

“Light” read by Kirsten Potter
This story is so full of strange details that it’s nearly impossible to summarize properly. An alcoholic woman with two shadows works security at a company caring for “sleepers” – people found randomly lying asleep on the ground. She visits pocket universes, sleeps with the occasional wolf-man, and fights with her troublesome twin brother, who sprung forth from her extra shadow. Although I did enjoy this story, the strangeness was at such a high level that it was kind of overwhelming at times.

Full disclosure: I received a free review copy of this book from NetGalley… and then I listened to the audiobook version on Scribd instead. It was worth it!