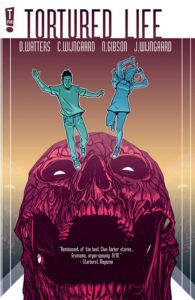 Tortured Life reads like a hack novelization of a gore-drenched heavy metal concept album, and it’s about as well-plotted as your average double-LP. In fact, the art wouldn’t look out-of-place on a metal band poster, especially when the skull-faced villain shows up and starts killing people.

Rich seems like a nice, normal young man. He has a good job and a beautiful girlfriend, but then one day he starts having visions of how everything and everyone around him is going to die. When the visions don’t go away, his life quickly falls apart and he is left friendless and alone. The book opens on the day he decides to commit suicide because he saw his own death in the mirror.

However, unbeknownst to Rich, his nearness to death opens a door to the underworld, letting through both a helpful ghost girl and the murderous Bloodyman – that aforementioned skull-faced killer.

The ghost girl, Alice, sticks around just long enough to point Rich at some exposition before disappearing from the story until the end. The explanation for her absence is that crossing over to the world of the living is difficult and dangerous, so she can’t keep going back and forth, but it makes her feel even more like a lazy plot device.

When the explanation for Rich’s visions arrives, it is both incredibly convoluted and completely nonsensical. The revelation doesn’t tie in thematically to his visions of death, and Rich and Alice respond to the explanation by as much as throwing up their hands and moving on. The ending is ultimately both anticlimactic and dour.

To be honest, I also really wasn’t a fan of the art style. The book’s cover is eye-catching enough that it drew me in, but the interior art just didn’t do it for me. It’s slightly similar to the cartoony style of the Chew books, but seems ill-suited to Tortured Life’s bleak tone.

However, I think I would have forgiven the art if I’d liked the story and characters more. Tortured Life was an underwhelming read, and I can’t recommend it.