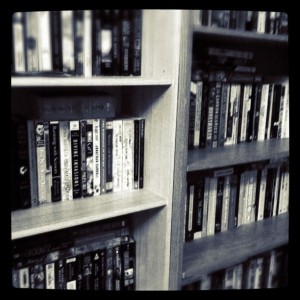 It seems like the bane of any regular reader has to be all of the books they’ve started but never finished. I know some people who refuse to stop reading a book even if it’s the worst thing they’ve ever read in their life. I am not one of those readers – and I don’t think I ever have been –  but I used to be a lot harder on myself about not finishing books.

A few years ago I forced myself to only read one book at a time, whether or not I was enjoying it. This is probably why The Wind-Up Bird Chronicle took me a good six months to read. Don’t get me wrong, I ended up loving it, but it’s an incredibly dense tome that I just so happened to be reading during one of my final semesters in college (instead of reading for class, naturally). After a while it seemed clear that all the guilt and recrimination I was laying onto myself was one of the main reasons I no longer read as much for fun. Even once I’d graduated and rediscovered free time, I didn’t seem to spend much time cracking open books. That had to change.

When I decided to rehabilitate my reading habits, one of the first things that had to go was this restrictive rule where I punished myself for not reading one specific book. I gave myself permission to only read books I was actually enjoying, and stopped stressing about reading multiple books at once. If I felt like putting down some heavy tome and picking up a goofy comedy instead, why not do it? It didn’t mean I couldn’t go back to the tome when I was in the right frame of mind.

However, even with this system, there are still books that I’ve started reading and then decided to officially put back on the shelf to try again at a later date. Whenever they’re library books, I send them right on back without a care in the world, but if it’s a book I own, they do tend to sit there on the shelf, staring at me accusingly with beady little eyes. I do my best to reassure them that just because I don’t finish a book doesn’t mean I didn’t like it. Then it occurs to me that I am personifying inanimate objects and check to make sure nobody is watching me.

Here are a few titles that stand out in my memory as notable books that remain unfinished, most of which I fully intend to finish some day:

Dhalgren by Samuel R. Delaney: I think I bought this book when I was a freshman in college 10+ years ago. I remember trying to read it one summer between semesters and only making it about 50 or so pages in. That isn’t too surprising, though; it’s a particularly intimidating 900 page tome full of all sorts of postmodern trickery. The first sentence is “to wound the autumnal city.” which is actually the second half of the book’s final sentence, and near the end of the book some pages have a second column of text off to one side. I’m sure it makes sense when you get there, but I didn’t quite have the attention span when I first gave it a try.

Then We Came to the End by Joshua Ferris: This one is a much more recent purchase. It’s a comedy about the employees at an advertising agency going down the tubes. It’s narrated in a collective voice by all of the employees at the agency, and told in a generally rambling anecdotal style. It is definitely funny, but I had a hard time sticking with it, probably because of its style. I’d still like to try again at some point, but I’m not in a huge hurry.

A Storm of Swords by George R.R. Martin: I may catch some flak for this one, I know. I read the first two books in this series back in 2008. Book two I remember finishing in a mad rush in about two weeks. I owned all four existing books back then, but I decided that I should hold off on reading books three and four until a firm date was announced for book five. Flash forward to three years later when a date is finally announced and it turns out I’ve forgotten everything about the series. I suffered serious narrative whiplash within the first few chapters and decided that it might be worth my time to go ahead and re-read all the earlier books. This one is probably my fault for waiting so long to finish the series, but I’d argue that GRRM doesn’t do the reader any favors, either. His books just throw you right in and assume you’ll keep your head above water.

Twilight by Stephanie Meyer: I actually listened to the audiobook of this one a few years ago just to try and figure out what all the fuss was about. I think I made it three-fourths of the way through before I decided that I couldn’t handle any more breathless descriptions of Edward Cullen’s beauty. Sometimes I wonder whatever happened to those crazy kids…