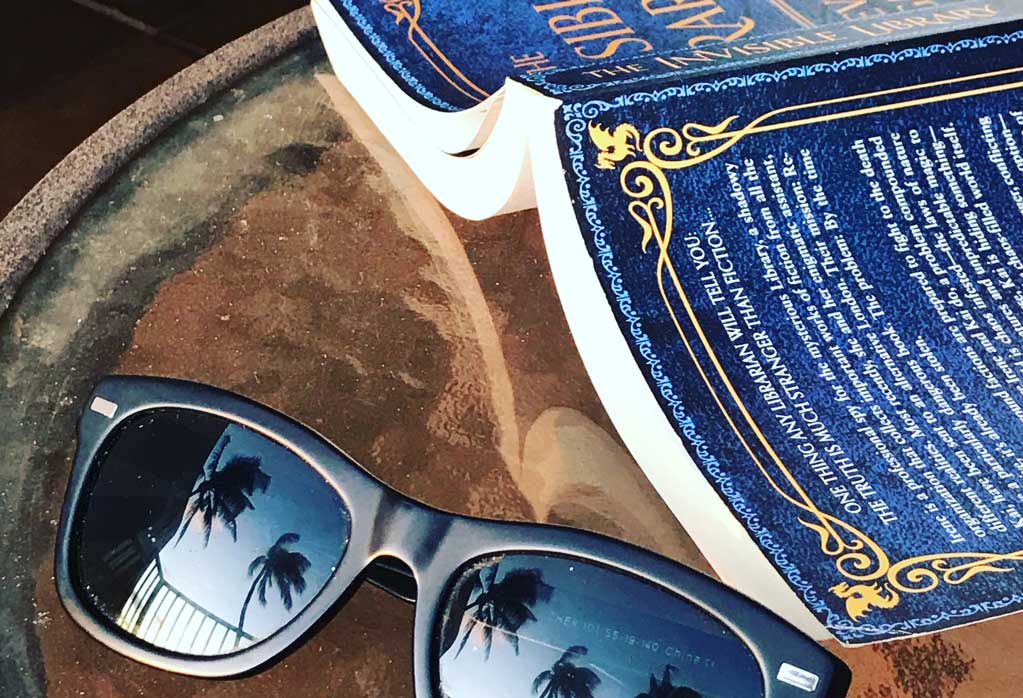 In the first week of December, we flew to Hawaii – the island of Maui, specifically. I was so tired on the plane that I mostly watched movies and TV shows, but I had plenty of downtime during the week to sit outside on a balcony and read. I also finished a Laini Taylor novella collection while visiting my family for Christmas. I didn’t read anything too heavy this month, and it was a nice way to wrap up the year.

The Survivors, Episode 2 by LEO

The adventures of the shipwrecked spacefaring teens continue, with higher stakes and weird occurrences.

The first volume was decent enough, worth reading mostly because it was available from ComiXology Unlimited, but this second volume takes a much more interesting turn.

Tragedy befalls some of the colonists, but the big twist is how the quantum anomalies that destroyed their ship affect them. The anomalies turn everything they thought they knew upside down, and they must deal with a much more complicated and bizarre situation.

The Muse by Zidrou and Oriol

The best part about this book is the art, which resembles paintings in a classic style. The story is about a commercially unsuccessful painter who spends all his time moping about his lover, who disappeared without warning. The slow reveal of what happened to her is only helped along by the unreality of the book’s painterly style.

Unfortunately, things go sour thanks to a moment where the painter lashes out at his moneylender and calls him a “dirty Jew.” I suppose the author intends to show how far he’s fallen, but it’s hard to separate the antisemitism from the rest of the book, especially because the moneylender is never portrayed as anything other than a villain.

An amnesiac blonde with nascent superpowers wakes up in a mysterious basement. She bitches and snarks until she finally starts remembering her past and the shit hits the fan. I couldn’t stand the main character in this book, and I can already barely remember what happened.

The Invisible Library by Genevieve Cogman

I started reading this at the beginning of October, but kept getting distracted by other books. I finally made some headway on it during my week in Hawaii, and I ended up loving it. It’s funny and much weirder than the unassuming cover implies.

The main character is capable, no-nonsense and charming when she tries to hide her insecurities and seem more put-together than she truly is.

She works in a secret library that exists between worlds, and goes out on acquisition missions to save important books. In this case, that means running into elves, vampires and werewolves, while teaming up with an analog of Sherlock Holmes and fighting the occasional steampunk mecha.

This is the first of six books in the series (so far), and I’m definitely going to pick up the rest.

Fix Her Up by Tessa Bailey

I think I saw a recommendation for this book on Twitter, but I can’t remember for sure. Fix Her Up is a sort of surprising combination of sweet, lighthearted romance and raunchy sex, and I’m glad I checked it out.

I think calling it a romantic comedy is a little bit of a stretch because it wasn’t necessarily funny, but it was silly and occasionally absurd, so I’ll give it points for effort.

I liked the characters and enjoyed the push-and-pull of their relationship, formulaic as it might have been. The sex scenes were pretty hot for a cute will-they-or-won’t-they between a party clown and a former baseball player.

That said, I winced every time the male lead said the word “babygirl,” but I guess that sort of thing works for some people. I’m also not sure I bought the happily ever after ending, if only because the book feels like it happens over the course of two or three weeks, tops, but I’m assuming that the romance genre has some required tropes, so there you go.

This book is much weirder than I was expecting. The blurb makes it sound like a funny bit of revisionist history, but leaves out the fact that some of the characters have magic that lets them turn into animals, and this magic ends up being a major part of the story.

I think that’s a big selling point (or turnoff, if you don’t like fantasy for some reason), so I’m surprised that they downplayed it to such a degree.

I’m honestly not sure what actually happened to the historical characters included in the book, but it’s nice to believe that they fell in love and had adventures just like they do here.

This is a simple story beautifully drawn. A young delivery pilot serves all of the tiny Japanese Islands far from the big cities, but when her grandfather dies and leaves her clues about a mysterious island, she becomes obsessed with finding it, even more so after she has a close call.

The protagonist spends most of the book in a bikini, but it feels more like the comfort of island living rather than anything exploitative. She also has a Very Good Kitty who tags along on her journeys snuggled into the front of a jacket she wears while flying.

This is a collection of three novellas with a few common themes: female protagonists, fairy tale creatures and a twist that turns on a kiss.

I read Taylor’s Daughter of Smoke & Bone all the way back in 2012, and I’d forgotten how evocative her writing is. Everything feels lush and dangerous and full of import, even if the stakes seem to be nothing more than a teenage crush.

It is long past time for me to finish the DoS&B trilogy, but this collection was an excellent appetizer.

The Survivors, Episode 3 by LEO

The survivors learn about what happened to their compatriots while they jumped ahead in time. They go on a research mission to study the quantum effects, but run afoul of aliens who separate the group, and then they go through another anomaly that thrusts them ahead in time an unknown amount.

This series is consistently interesting and well-drawn, and I’m sure I’ll enjoy the remaining two volumes. Not a bad way to end my year of reading.

The Lottery and Other Stories
by Shirley Jackson
tagged: currently-reading, physical-books, and short-stories