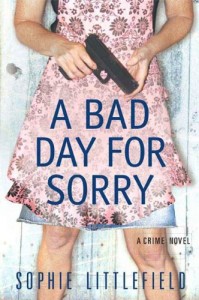 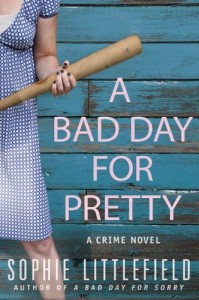 Just got back from a trip to BookPeople and wanted to share these striking covers for the “Bad Day” books by Sophie Littlefield.

I love these designs. They’re eye-catching but minimal, and tell you everything you need to know about the book’s premise. You can guess that the main character is feminine but still dangerous with a weapon. It’s a wonderful juxtaposition to see a woman in a summery dress holding a handgun or a baseball bat. You can tell from her stance that she means business. The second book’s design immediately made me pick it up and read the synopsis.

Interestingly enough, the third book’s cover changes up the formula a bit: 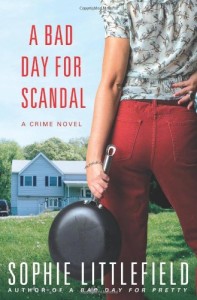 Instead of a woman standing facing us with her feet planted, she’s turned around with her hip cocked, holding a more traditionally “female” weapon, a frying pan. Where the first two covers seem to hint at an intensity and violence at odds with the heroine’s dress, this one seems to be playing up her sex appeal and implying that this story will be more lighthearted than the first two.

The setting also appears to be slightly less country and more suburban than the first. Instead of a backdrop of peeling paint, we see a beautiful house off in the distance. In my mind, the first two covers clearly say “crime novel with a female protagonist”, whereas the third seems to imply that the story might be more like Desperate Housewives.

It’s really fascinating how they’ve used the same basic elements in the third book’s cover to market the book to slightly different audience. I wonder how the author feels about the shift in design?